Head Covering Requirements - the Flip Side

Personally, I believe that wearing a head covering is a choice, and as such, no one can insist that I don't need to wear one, or even more so that I am not allowed to wear one. I choose to wear a head covering to pray, to teach the Scriptures, to worship in public and sometimes in private, even by my own choice as a reminder throughout the day as I work or relax. As a rational human being I believe that I have the choice to wear a head covering or not, to obey my conscience or not, to follow what I understand the Scriptures to teach, or not.  And I believe that others have the right to make that choice as well. If I force someone to wear a headcovering because I believe it's a requirement, but they disagree - if they wear it anyway, are they truly obeying? or just complying in rebellion? Likewise, if I believe that I should dress modestly, and that covering my hair is modest, humble, less distracting; I cannot make someone understand that belief, but I can only instruct and dress as an example. I can be sad that someone else doesn't agree with me, because in the case of modesty we affect not only our own lives but the lives and minds of others as well - but I cannot change their mind for them.

On another hand altogether, I would have no problem complying with a company policy that required a hat, scarf, or other covering as a uniform policy.  These policies have existed for years and in all sectors of society. Was the woman in Jordan required by God to wear a covering? She didn't think so. But God does ask us to live in the world even when we are not a part of it. To love others as we love ourselves. What would have been the sin or crime in donning the uniform when another company (or country) takes over your own? No one asked her to give up her faith. If she felt that they were, then that should be the reason for a suit, but not a simple uniform policy. Example: Is every woman who works as a hostess for Emirites Air a good solid Muslim? Most of us would guess not; but the women all wear those lovely hat/scarf ensembles to work at the airline. And another example, if Hillary Clinton can don a head covering to visit a mosque or the Pope out of respect for others and we all still know that she does not represent either religion AND that she's a strong powerful woman, then is there really a problem?

In another look at this story, and one of the first that I thought of (as a head covering Christian woman), is the sad fact that this woman who refuses to wear a head covering on religious grounds is a member of the church of Christ which follows the teachings of the Bible, wherein is found a good solid teaching that women are to wear a head covering. People outside the church who are aware of this fact will see Christians in general as those who don't even obey their own Scriptures. As I alluded to earlier, Christ also taught his disciples by example and word that it is more than okay to spend time with those who may be considered "sinners" - even when someone more pious-feeling than you may accuse you of being one of them. His disciple, Paul, wrote that he would "become all things to all men, so that I might win some". We are not to condemn; that is not our place or our ability. We can use our eyes to discern (to "judge" in an old fashioned kind of translation), but not our place to stand before a crowd as the Christ of God did when he condemned those of his generation for being hypocrites. This defiant, rebellious, suit-seeking behaviour is counter-Christ behaviour, and the world will see it as such, and continue to judge (or discern, see) Christians in general as self-seeking, rebellious, or even "holier than thou". The opposite of humble, which was Christ. And because head covering in the Muslim faith is a part of feminine modesty, she will be perceived by others as immodest, thus putting all Christians in general into that same category.

It is a sad situation. A frustrating thing to fully comprehend and try to explain why it might be seen as sad. I am sad that the media had to be involved, because of the misunderstandings that will abound. I am sad that Christians and therefore Christ will be misrepresented yet again. I am sad that these head coverings cause so much division when they are such a lovely symbol of faith and modesty. Head coverings are not (and should not be) worn just because of some ignorant male-dominated mandate. They have such a higher meaning than that.


Wearing a head covering is (and should be) a
FREE-WILL,
MODEST,
FEMININE and
NATURAL*
CHOICE
made by women all over the world,
throughout the ages.

Stop making it into some kind of evil thing to be fought about.

Yes, again, but this time, it's men's head coverings.  Still, local coaches and referees can't make a decision without consulting the books, and the books apparently still read: "no head coverings" for soccer players on the field.  No matter that the big guys at FIFA have pretty much agreed that, as long as they are not a safety hazard, women may wear head coverings to play. I think if a Sikh man can wear his turban in the line of duty as a cop or a soldier, he can certainly play soccer with a turban.

Not a whole lot of philosophy in this entry. Just a heads up.

Follow up: just found a CAIR-CAN press release which states that the ban on the Montreal young men who want to wear a turban is "a violation of Canada’s various human rights codes."

The release goes on to report: "With the abundant availability of new religious headgear which can satisfy both religious and any perceived safety requirements it is clear that the ruling is discriminatory, effectively suggesting that players ‘check their religion at the door’,” said CAIR-CAN Executive Director Ihsaan Gardee.

“Whether intentional or not, this ban sends the clear message to young people that what matters is not your skills on the pitch but whether or not you fit a predetermined ‘look’. In view of the recent decision (set to be ratified in July) by soccer's governing world body, FIFA, to rescind its ban on the hijab - the Muslim religious headscarf, we call on the Lac St. Louis Regional Soccer Association to allow the wearing of religious dress that does not present a health and safety hazard and to send an unambiguous message that the rulings of the Lac St. Louis Regional Soccer Association cannot supersede Canadian human rights laws. Every young person in Canada should have the right to play.”

Had to include that quote, esp. the line about sending a message to young people that what matters really is that you fit a certain 'look', and not how you play the game.

Posted by Michelle Maddocks at 10:44 PM No comments:

"Liturgical Time Veil Shop: Headcovering Ladies, We Have a Treat for You"

Sweet and fun! Look at this "Christian Headcovering Mug," from the Veil Shop on Etsy: 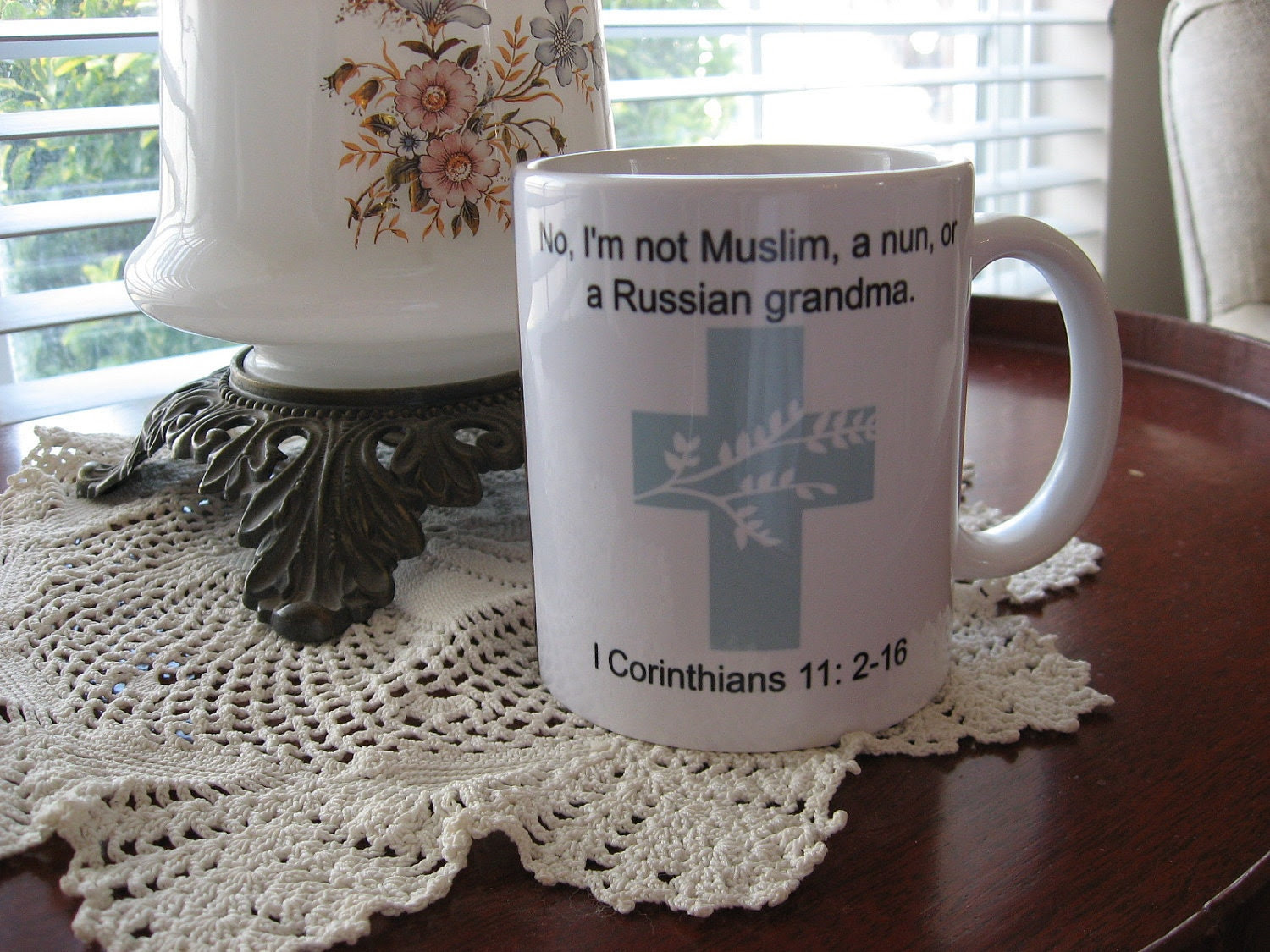 Also, check through all the pages at Liturgical Time's Etsy shop and website, for lovely headcoverings.  From their page: "We provide handmade chapel veils, mantillas, and headcoverings for our patrons to wear in church, at prayer, or in everyday life. We are able to take special orders, and to provide some customization, so don't hesitate to make special requests. Special sales, promotions, and giveaways are posted on our blog: http://www.liturgicaltime.blogspot.com".  The author and creator, Michelle, writes about home keeping and traditional church topics in her home blog.


Liturgical Time Veil shop has its own blog called "Liturgical Time Veil Shop", with articles and other information specifically written toward veiling and head covering. Find Michelle's own personal reasoning in this article: "Why I Wear Catholic Chapel Veil".

Many blessings to you, Michelle, as you and your family serve others and the LORD.
Posted by Michelle Maddocks at 3:21 PM 3 comments:

Email ThisBlogThis!Share to TwitterShare to FacebookShare to Pinterest
Also Check These Labels: Catholic, Christian, Christian Orthodox, how to

In Pictures: Hijab for Soccer/Football Players

In this photo essay, "Elham Seyed Javad shows how to wear her design for a sports hijab in Montreal, May 1, 2012. Her design is in competition to become the headscarf chosen by FIFA, which is lifting its ban on the head coverings in soccer."  See:

A new hijab for soccer is born - The Globe and Mail

For more information and a short video of women in action wearing hijab, check out this link, about Iran's footballer ladies:  "Iran’s female footballers in action after head scarf ban lifted". - in RT.com
Posted by Michelle Maddocks at 2:58 PM No comments:

Wearing Headcoverings and Fear of Islam

In this article, the author explores the European actions of nations and locations which seek to ban head covering and face covering, which seem rather a response to fear of Muslim activities than a protection of women's equality, as reported by Amnesty International.  The report is titled "Choice and Prejudice," and "pays special attention to national laws or local rules against wearing headscarves or face-covering Islamic veils." Noted in the end of the article is the notorious example of the Norwegian mass-murder by a man who feared a Muslim takeover of Europe. Also noted in the article, to remind all of us who haven't the personal experience or memory, that Muslims have been a part of the fabric of Europe for generations, and there is no "telling them to go home." So head coverings are now to many in Europe, simply a rebellious religious statement, and as such bring fear to the uneducated and emotional and sometimes physical harm to those who wear them.  The opening line begins with this phrase: "European laws on what girls and women wear on their heads. . . "
Posted by Michelle Maddocks at 3:10 PM 1 comment:

The linked short article hear triumphs the Ala Magazine in Turkey, which proclaims that "Veiled Is Beautiful" in its photos and advertisements geared toward women who choose full modest dress, including head coverings, long skirts and sleeves.  Glamour for modesty seems a contradiction, since the very definitions clash. But it may do something for the education of those who believe that to dress in a non-flesh revealing way must mean the same thing as dressing in a sack.

A short quote from the article:

The fashion world now sees a growing demand from conservative Turkish women who are keen to assert themselves.

"There are now much prettier things than before," said Merve Buyuk, a 22-year-old trainee at Ala. "Designers have now understood that we exist. They've started making clothes that are not necessarily black or brown. ... I'm pretty happy with this change."

Ala is hoping to influence conservative women's fashion and cash in on it with advertising revenue.

"With this magazine, we are changing trends. We say that women in headscarves can follow trends. There are more and more products on the market they can access," Aslan said.

More at the link: