Hijab - Always in the News

Yusuf Islam, the musician formerly known as Cat Stevens, has won money for his charity after being awarded damages over articles that he had a sexist attitude to treating women due to his Muslim faith.

A bus company has apologised after a Muslim family of nine was stopped from boarding a bus to Leeds. ... The Alhajeri family were refused entry onto the Transdev Harrogate and District No 36 bus from Harewood to Leeds on Monday evening, because the mother and eldest daughters were wearing burkhas.

"From a manifesto to authorship: the story of pro-freedom activists"
Book and author review in todayszaman.com
From the book:

"We set off with a manifesto advocating full freedom, not just for ourselves but for all people. Indeed, at first we were not so assertive, but encouraged by the snowballing support of freedom proponents behind us, we decided to go ahead with our struggle and compiled our story into a book."

Photo here from the linked article above. From the article:

The book, of the same name as the women's original manifesto, was penned by Yılmaz and two of her friends and fellow activists, Hilal Kaplan and Neslihan Akbulut. The 160-page book primarily covers the struggle of headscarf-wearing Turkish women on university campuses, but touches upon problems encountered by minority groups in the country as well.

In Sarajevo many young women are choosing to wear the headscarves that their mothers spurned. It's a provocative decision in the moderate Muslim country, where one young visiting Muslim says she feels more accepted back home in Des Moines, Iowa. 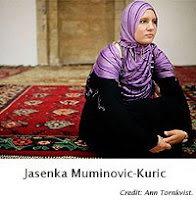 There may be fewer headscarves in Sarajevo than in the immigrant neighborhoods of London or Berlin, but many young women walk through the tiny capital city of Bosnia-Herzegovina wearing the headscarf most of their mothers spurned at their age.

They contribute to the harmonious diversity of the street scene here, where different expressions of Islam mingle with men in shorts and women in short skirts in this country of 4 million. Muslims, 40 percent of the population, live alongside Serbian Orthodox and Croat Catholic citizens.

photo of Jasenka Muminovic-Kuric, subject of the article, taken from the article itself. Please click to read the entire personal story.

For more information about Muslim women, links and news articles and other information all in one place. From "Islam For Today" (Islamfortoday.com)
Posted by LisaM at ThoseHeadcoverings at 8:59 AM

this post is very interesting to me... I live in Croatia...Croatia and Bosnia were 2 of 6 republic in former Yugoslavia... before, in communist regime you couldn't see women with religious headcovering except nuns...

Thank you for commenting - I found it interesting too, because we grew up just not knowing very much at all about this area of the world. It's nice that the world is so much "smaller" these days, with the help of the internet.