News from All Over

"The hijab goes high-fashion", in the Guardian.co.uk, including internal links to hijabi websites in the UK.

"School and religious symbol cases ", in the BBC.co.uk, listing various storied about head coverings and other religious symbols and the difficulties with them in public and private schools in the UK.

An editorial comment on religious symbol cases can be found in "Huge case over small item bodes ill for further battles", in the TimesOnline.co.uk.

(Photo taken off of Flikr.com, by blackrainbowmodel - please click this link to see it full sized and read her notes. I saw this in someone's ID photo on blogspot - it definitely catches your attention, eh?)

ISTANBUL, Turkey (CNN) -- Turkey's Constitutional Court has rejected a proposed ban on the country's Islamic-rooted ruling party -- the Justice and Development Party, or AKP -- for alleged anti-secularist activities, the leader of the court said Wednesday.
...

Secularists were outraged at the AKP's recent attempt to lift bans on headscarves at public universities. The move failed after the Constitutional Court overturned the amendment in June.

Headcoverings were banned in the early 1980s by Turkey's universities because they were seen as political symbols and conflicted with the nation's secular governing system.

The government accuses its critics of using the courts to try to deny the AKP its legitimate victory from last year's elections. AKP says it is promoting democracy and pursuing goals that would bring Turkey into the European Union.

Although it is a predominantly Muslim nation, it has taken the trappings of religion out of public life, in accordance with the policies of Kemal Ataturk, the revered founder of the modern Turkish republic.

AKP is not the first political party that Turkey's courts have tried to close. More than 20 political parties have been banned by Turkey's judicial system in recent decades.

DOHA, Qatar, (The Peninsula), By Raynald Rivera -- Ghutra, the traditional headscarf worn by Qatari and other Arab men, has been nowadays in great demand not only among Qataris but also among residents and tourists. 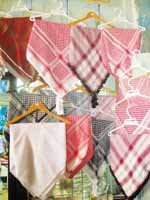 "Asians and westerners, all from different parts of the world buy the ghutra," said Mohammad, a storekeeper at Souq Waqif.

One of the chief uses of the ghutra is to protect the head from the heat of the sun. "It's summertime, so many people buy it to guard their head from the scorching heat," he added.

Ghutra is a square fabric, folded into a triangle and worn on the head by Qatari men and other Arabs. It is held in place with an agal - a cord made of wool or camel hair. Usually it is either red and white checkered cotton or plain white made of fine cotton. It is a matter of personal taste as to which one a man sports, though the plain white, being a lighter fabric, is more popular during summer.

(story continues at title link above) (photo: Ghutras on display at a store in Souq Waqif. (Raynald Rivera))

Norway (Aftenposten.no/english) -- Two sisters who emigrated from northern Iraq to Norway as children and have studied costume and fashion design are launching their own line of head-coverings, geared to Muslim women in Scandinavia.

"We started using the hijab three years ago, and it was very difficult to find any that fit into daily life in a western country," Nafeesah Badrkhan told Oslo newspaper Aften.

She and her sister Susan, both educated in fashion and costume design, started making their own. "We kept getting questions from other girls and women about where we had bought them," Badrkhan added.

The two soon realized there was a market for western-style head coverings, and their entrepreneurial instincts led to creation of an entire hijab collection. They plan to launch an online boutique this fall.

The two sisters have designed their western-oriented "hijab" for outdoor life (note the sun visor on Susan's at left), casual and formal use. (PHOTO: ANNE-STINE JOHNSBRÅTEN) More of this story at the title linked above.

Posted by LisaM at ThoseHeadcoverings at 3:34 PM